This year across the world, there are going to be hundreds of events celebrating the 500th anniversary of the death of the polymathic genius, Leonardo da Vinci. Hard to believe that he was born as the illegitimate son of a notary, Pietro, and a maid, Caterina. His mother married a baker nicknamed Attaccabrighe (the quarrelsome) living in the village of Vinci, where Leonardo grew up until, at the age of ten, his biological father sent him to Florence as an apprentice. His teachers, such as Verrocchio, were the masters of the Early Renaissance; his fellow apprentices, such as Botticelli, their greatest students.

Initially, however, Leonardo was not counted among them. No one doubted his talent, but it was thought that he lacked endurance: it was said that he began a lot, but finished nothing. They were not exactly wrong, because throughout his life Leonardo occupied himself not with one thing, but with everything: painting, astronomy, warfare, literature, gastronomy, anatomy, botany.

Leonardo lived as he liked: he played the lute, was a passionate cook — he allegedly even opened a tavern in Florence with Botticelli named To the Three Snails. He wrote curious recipes (saffron in wine, sheep testicles in cream and honey) from right to left, and invented a new drink made from lemon juice, rose petals and alcohol. He christened it Acquarosa. He was a vegetarian (“Sheep and cows eat grass and live; why should I not be able to live from vegetables?”) and even wrote an etiquette book.

For the women of his day, he became a kind of beauty coach. He created creams, fragrances, and invented a recipe for bleaching hair blonde. His most loyal enthusiast was Lucrezia Borgia, daughter of Pope Alexander VI: her beauty was greater than her bad reputation. For the journey from Rome to Ferrara, to her third husband Alfonso d’Este, Lucrezia took 27 days because every five hours she had to wash, dye and perfume her blonde locks of hair.

In 1482, the Florentine recommended him to Milan.  He was 30, but his résumé was so unusual that even the hardboiled Ludovico Sforza let himself be charmed by it. He appointed Leonardo as his advisor, and to master of the city’s defences and festive ceremonies. Leonardo introduced himself to the Prince as follows: “I am the best bridge and war-machine builder, my painting and sculpture are at least as good as that of the most famous artists, I shine at inventing puzzles and knots, and no one’s cakes can compare to the quality of mine.”

When he began painting The Last Supper in the refectory of the Dominican monastery of Santa Maria delle Grazie, which took him three years to complete, he began with the napkins and forks. For that work Ludovico gave him a vineyard, where Leonardo experimented with different varieties.

Leonardo spent his last years as a guest of the French Emperor, Francis I. He housed Leonardo royally in Château du Clos Lucé, close to Amboise. Leonardo brought some paintings with him to France, including the mysterious Mona Lisa, whose real identity remains unknown to this day. He left the bulk of his estate   to his cook, Maturina, and the faithful servant, Battista, both of whom had accompanied him to France. 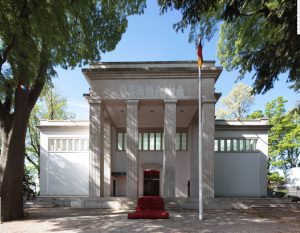 This year’s Biennale in Venice started on 11 May. The American curator Ralph Rugoff has selected the title “MAY YOU LIVE IN INTERESTING TIMES” for this, the 58th international exhibition of art in Venice. It is [supposedly] an old Chinese adage that, particularly in the “interesting times” in which we currently live, definitely has certain relevance.

Not without reason, Ralph Rugoff, the director of the London-based Hayward Gallery, is renowned for his communication-oriented curatorial style. The German Pavilion, curated by the Hungary-born Franciska Zólyom (1973), features installations and videos by the artist Natascha Sadr Haghighian (born 1967 in Teheran). For the Biennial, the artist has adapted her surname and now calls herself Natascha Süder Happelmann, the result of improvement algorithms and auto-correction programmes applied to her real name.