In My Own Write 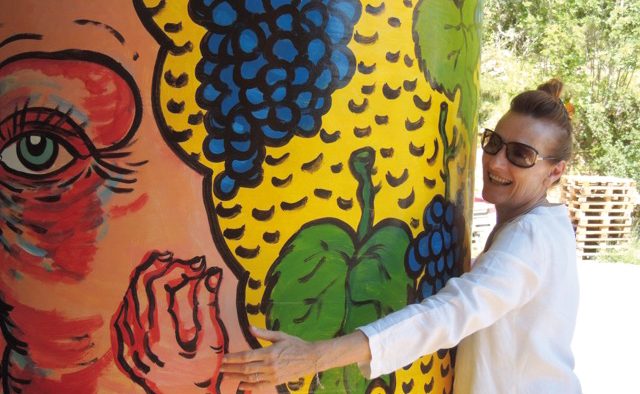 One fascination of the German language is its complex simplicity. No other language comes to mind that is similarly capable of combining words in such a manner that they take on completely new meanings. From but a lone root word, one can create countless variations with completely new meanings simply by placing a different and usually tiny prefix in the right place.

For example, the simple word fahren, or “drive”, can be transformed in the blink of the eye into überfahren (run over), zufahren (approach), vorfahren (drive ahead), verfahren (get lost), auffahren (tailgate or run into the back of), erfahren (experience), losfahren (depart or get going), fortfahren (continue), and so forth. The root remains, but the meaning changes. One must be careful: the prefixes are so infinitesimal that one can easily assume them innoxious, or even overlook them – but their impact is enormous.

When I was first becoming familiar with the German language, I often inverted the words and prefixes, creating compound words like Zugnacht (train night), Stuhlfahr (cage elevator) or Ballfuß (ball foot), combinations that remained indecipherably meaningless to even my most fanciful friends. That the legendary German preciseness also has linguistic relevance was something that I came to learn. That fahren (go/leave), for example, was not – as in Italian – synonymous with gehen (go/leave) I only first realised when I confused Ausgang (exit) with Ausfahrt (exit ramp) while trying to leave an underground garage (garage profondo) and suddenly sat bewildered in my car at the edge of a steep stairwell.

Lernen (learn/study), in turn, is not the equivalent of studieren (study/learn). Here, too, I quickly grasped the semantic difference when I, as a young mother, said “my children like to study (studieren)” to someone and heard in response, “Oh, I thought you were still young.” The comment needed some initial deliberation on my part, but I nevertheless immediately felt old.

A non-German tries to memorise certain expressions that come up particularly often in conversation. Ärgerlich (annoying), for example, is a word used often in German. Many things annoy: a delay, an inconsistency, a lack of clarity – “that annoys me” is a commonly used standard phrase. Alles klar (all clear), on the other hand, is a firm and positive term. Curiously enough, the term serves well both to open a conversation – as a question: “Alles klar?” (“Everything OK?”) – as well as to end one.

“Wer fährt?” (“Who’s driving?”) is also standard terminology. This question, which is routinely asked by all couples prior to the beginning of an evening of social activities, was naturally completely incomprehensible for a Venetian. My spontaneous interpretation was that the people present must not like where they were, or why else would they want to leave again so promptly?

Geburtstagskind (birthday child) is a unique German word, one which also even allows an eighty-year-old to become a child for one day. At the language school I was attending, we had just reached the Geburtstagslektion (birthday lecture) when a robust Ordnungshüterin (female law enforcement officer) confronted me as I was parking illegally. She was in the midst of issuing the ticket when in a moment of inspiration I revealed, “Today, I’m a birthday child!” Lo and behold: she congratulated me and cancelled the ticket.

And then there is also Geschmack (taste). One either has it or not, and the difference is decided by the suffix: the one is geschmackvoll (tasteful), the other is geschmacklos (tasteless). What I always wondered about during my first years in Germany was the low importance accorded to this term, which is often subordinated to expediency. In some things, particularly within the culinary area, have to date unfortunately remained unchanged.

It is wrong to buy prosciutto (a.k.a. “parma ham”) in Lagen (layers). The withered, blue-grey slices are so unpresentable that they themselves feel ashamed. The ham must be freshly cut, for each and every customer. And the pitiable cappuccino: not only does it cost – unnecessarily – as much as a loaf of bread, but it is also usually prepared with UHT milk. That that has established itself in a milk-producing country like Germany is an affront to good taste.

And what is with that tic of the waiter to sprinkle the fully prepared meal with pepper from an outrageous wooden trumpet, something only admired in Germany? Do the cooks lack taste, or is life so pallid as to require a little extra spice?

I stand by my opinion: everyone is permitted to indulge in attempting breathtaking culinary combinations, but to align myself with the words of Arrigo Cipriani, true taste is “la semplicità complessa” (the complexity of simplicity) – as is innate to the German language.